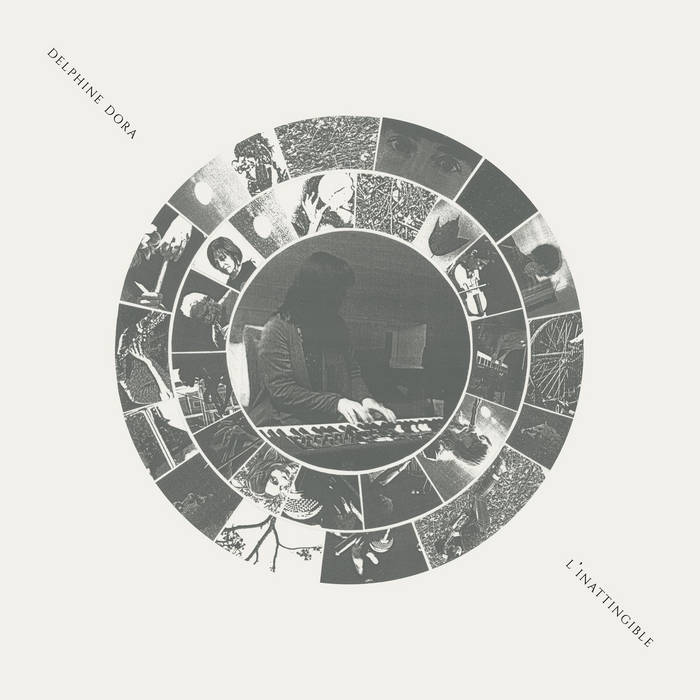 With L’Inattingible, Delphine Dora’s music unfolds by drawing upon a new palette of colors. It will not escape anyone, that after having sung, in foreign, invented languages, or through extended vocal techniques, the musician resorts for the first time, to solely using the French language; and that after having often set texts and poems by other authors to music, she authorizes herself here to sing her own texts and fragments.

But beyond these formal enrichments, the new musical ambitions developed through L'Inattingible are to be found in the very fabric of the record. If the previous albums had been conceived through improvisations or spontaneous compositions, the new pieces have found their definitive incarnations through a lengthy process of collation, rewriting, and a multitude of transformations. Moreover, the composition process now involves a complex montage of texts, sounds and instruments. If the keyboard remains the inextinguishable lung of the record, it is no longer rare to come upon Delphine's sung lines and have them echo into a lush instrumentation - where in voices and instruments create a language, and develop dialogues that have never been heard before.

The new charm of her music seems to lie in the many participations that punctuate the album, giving her pieces their very particular colourations. We can hear no less than thirty instruments with configurations that differ from one piece to another: wind and string instruments, electronic instruments, a multitude of keyboard sounds, unusual instruments and all kinds of incongruous sonorities. Among them are Aby Vulliamy’s viola, accordion and musical saw (Nalle, The One Ensemble...), Adam Cadell’s violin, Susan Matthews’ harmonium, Taralie Peterson’s saxophone (Spires That In The Sunset Rise), Le Fruit Vert’s analog synthesizers, Valérie Leclercq’s percussion and flute (Half Asleep), Paulo Chagas' oboe and clarinet, the voices of Laura Naukkkarinen (Lau Nau), Caity Shaffer (Olden Yolk) and Jackie McDowell, Tom James Scott's ghostly piano, Sylvia Hallett's bicycle wheel or hurdy-gurdy, or Gayle Brogan's sculpted sounds (Pefkin). That is: a constellation of musicians who have never ceased to expand their sonic territories, experimenting throughout the years since the 2000s, drawing inspiration from folk or psychedelic music as well as from the field of improvised or experimental music.

It must be highlighted, the extent to which this record could only come into being through the presence of these different participants. Incidentally, all of its strength lies in a paradox that gives shape to this "inattingible”, which is all the more elusive because it seems to only assert itself only through a series of actions engaged in a continual flux between presence and absence. Constantly brushing against each other, these sound bodies come to trace, as we listen, the contours of an "other" space that is both familiar and foreign to us. Thus, and contrary to what might be suggested by the participation of such a large number of musicians in the elaboration of the album, it finds its energy in this constantly renewed capacity to make the absent heard. This absence is certainly not played, but acts as a presence, a kind of “horizon inconnu” (unknown horizon) situated at the edge of our perception, abounding in unpredictable potentialities.

"How to describe what has never appeared to us," Delphine asks herself on the piece entitled "Loin" (Far). There is, of course, no definitive answer to this question. Perhaps only the belief in a collective that is in the process of becoming, that, through the forms of engagement requires that everyone (musicians and listeners) unearths all of the “sensations enfouies” (buried sensations) that allow us to catch a glimpse of other forms of life that are all the more fascinating, because they remain on the threshold of the “l’inexplicable".

A million thanks to all the musicians who contributed to the record. Special thanks to Sylvia Hallett and Valérie Leclerq for their technical assistance, observations and feedback: without them the record would have sounded much different. A big thank you to Marie-Douce St-Jacques for the artwork, to Gaëtan Seguin and Maxime Guitton from three:four and Michael Kreitz and Christophe Houyon from Meakusma for their support; and to Julien Grandjean for the mastering.