by Norberto Lobo and Eric Chenaux 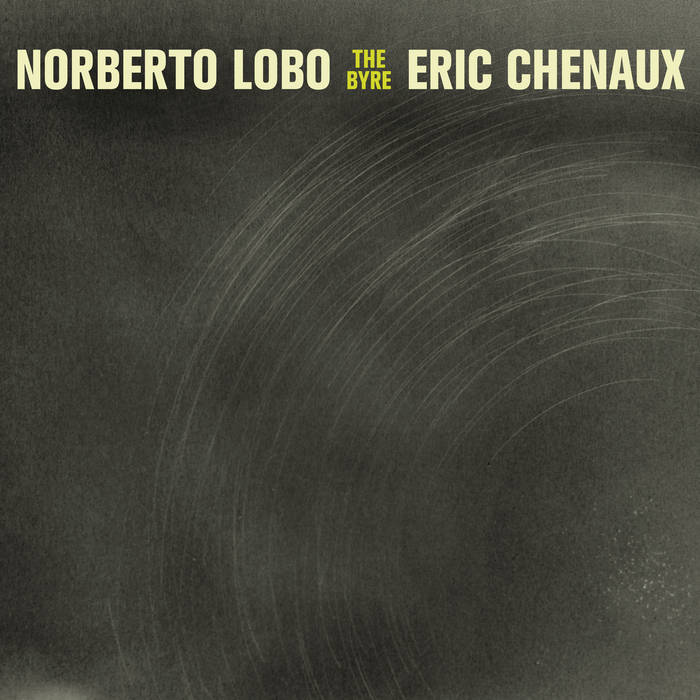 When I recall the five days of Norberto Lobo and Eric Chenaux's September 2015 residency at Le Bourg in Lausanne, Switzerland, the first thing that comes to mind is Eric's enthusiasm for my partner Anne’s salad dressing. We knew we were receiving two gourmets, inexhaustible on the subject.
This residency, which I had invited my friend Laurent Bichara to record, was particularly close to my heart. Here were three people who are very dear to me in a place that is equally so. And yet, when Eric, Norberto and Laurent left, I was troubled.
After these few days of recording, I had no idea what the finished record would sound like. For four days I watched as two players interacted, with disconcerting composure, for varying lengths of time, at sound levels near the limits of the audible, without repetition. They seemed to drift with the mood of the moment, without trying to force anything. Only to play - together.
Eric and Norberto returned from a first editing and mixing session with 90 minutes of music. Later, while Norberto confided to us that these few days had enabled him to unlearn the guitar, Eric had already immersed himself in the mix with enthusiasm.
It is honestly difficult for me to connect the end result with what I heard during the residency. And yet, everything was already there. Eric, with help from Laurent and Cyril Harrison (who finalized the mix and the sound of the record), was able to rework the raw material to make perceptible what I had at first not been able to hear. It is discovered again with each new listen - more beautiful, more fluid, and always more complex. Without trying to comprehend this secret transformation, I prefer to continue to listen to The Byre simply for what it is.
- Gaëtan Seguin

In the liner notes of his record with dancer Min Tanaka, Music And Dance, Derek Bailey writes “Duo playing has no need of explanations…duos by their nature are self-explanatory.” This claim, at once trivially true and brilliantly counter-intuitive, is, I think, a wonderful place to start here. Norberto Lobo (electric and acoustic guitar) and I (electric guitar) recorded The Byre in Lausanne in September 2015, with Norberto having just spent the month of August at Moinho da Fonte, not far from the Spanish border in eastern Portugal. I imagine Norberto spending most of his waking hours taking walks with the dogs along the bank of the Lucefécit Creek, playing ping-pong and making his infamous Ribs à la Nor. Mariette and I had just returned from the farm house in Correze France, where we were laying low and picking mushrooms in the forest. When Nor and I met up in Lausanne it was immediately clear that we shared a hesitation. We didn’t fight it. We just started playing with it.

In The Byre I hear how spaces and times leave their affects like so many traces. And how the present-time of the music is something like an interval. A present interval that is not the result or effect (or even function) of our shared hesitation, but is the very hesitation itself. How and what (or if) we were feeling or thinking at the time - this will never matter. Instead: This interval, that is going nowhere and going anywhere, seems like one of the richest figures by which to think beside this music. I hear this beside not as a reaction between the two of us, not as Nor and I occupying an either side of the music, but as a kind of crack in the very relation between musicians and music so that not only does one not come before the other, but that each (Nor, me, The Byre) is so stuffed with the other that it’s impossible to distinguish who’s who or what’s what ...leading us, once again, to the interval. This interval (with all of its smears and gauzy knots) is a space where listening can happen, which now compels us to add another component to our duo--the listener. If this perverse mathematics, in which now four equals two, is not self-explanatory then that’s ok too for we can always return to zero and listen again.
- EC

This record would not have been possible without Muriel Jost and all the people working at Le Bourg and Gaëtan Seguin at three:four records, with special thanks to Anne Junker.