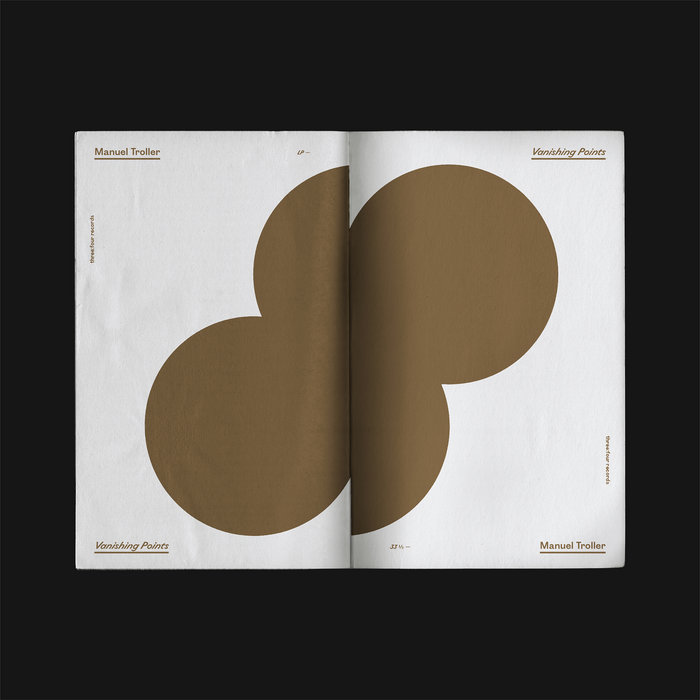 Even though solo albums tend to be self-portraits, this one’s different: it’s as if Manuel Troller has created a self-portrait, only to abandon the idea. The record’s six Vanishing Points are places of refuge he withdraws to. His music engages with the audience as if it were an open artefact, giving you the powerful sense of being able to move freely within it – of being able to engage with yourself, rather than with the ego of an artist.
For years, Manuel Troller shied away from performing solo. But three years ago, the Bee-Flat jazz club in Bern asked him to play a gig with Marc Ribot. The young, up-and-coming Swiss musician was to play first, followed by the American grandmaster of free improvisation on the electric guitar – clearly an opportunity just too good to pass up. Since then he not only plays with and composes for Schnellertollermeier, his “main” band, but also performs solo. And now he’s releasing Vanishing Points, his first solo album, recorded using only one guitar, live, with no overdubs. It features six abstract yet sharply designed compositions bristling with minimalist, shifting tessellations without relying on obvious dramatic flourishes. There’s no rock dynamism, no catharsis; only the ingenious and clearly structured form the musician gives his ideas and sounds. And then there’s also Troller’s talent for making his guitar vignettes sound surprisingly like club music.
No, Manuel Troller isn’t what you’d call a sound scientist. He’s not interested in experimentation for experimentation’s sake. He’s more about transforming this musical language into a craft, about giving it form, and thus finding a new lyricism within it. This is what these partially carefully composed, partially freely improvised Vanishing Points speak of. They translate his playful curiosity and fervent adventurism into ingenious and perfectly formed compositions. Only in “As Long As You Do What They Say” there’s the feeling of listening to a work in progress. Here, the sound of his electric guitar has a tactile quality to it – chopping, scraping, slicing and grating – as we listen to a sonic sculpture gradually take shape.
“Hologram”, the album’s opening track, on the other hand, is a sonorous mobile floating in zero-gravity equilibrium. Overlaying its stationary synthetic sounds and humming sine waves, like an echo or a memory, is a simple sequence of notes reminiscent of a piece of ancient music. In the title track, “Vanishing Point”, the roar of time and place also disappears into the perpetuity of a drone hovering in the background, over which Troller’s guitar plays with majestic poise. The “Revolt” consists of a stationary, but modulated sound which discharges into elemental humming and blues sounds. And finally on “Wormhole”, the album’s 18-minute-long central track, the electrical sound of the guitar has been broken down into compact formulas, connected in series and arranged as a club track which is enjoyably easy to dance to. The long outro creates the feeling of floating along in a digital orbit, past the last fragments of rock guitars.
Thus Manuel Troller is entirely a guitarist of his and our time. His electric guitar has outlived the electronic music revolution by appropriating its patterns, methods and abstract character without betraying its own history. Troller’s electric guitar is neither a prop used for excitation nor is it an instrument of agitation. Troller’s mode of playing doesn’t turn emotions, associations and memories into sound – let alone impose them on the listener. He merely allows them to be expressed. His music doesn’t tell us what we’re listening to and how we should feel, it only shows us – with the utmost clarity imaginable – that we are still capable of emotion itself.

All music by Manuel Troller (SUISA).

Many thanks for financial support to Albert Koechlin Stiftung, Fuka-Fonds Luzern.